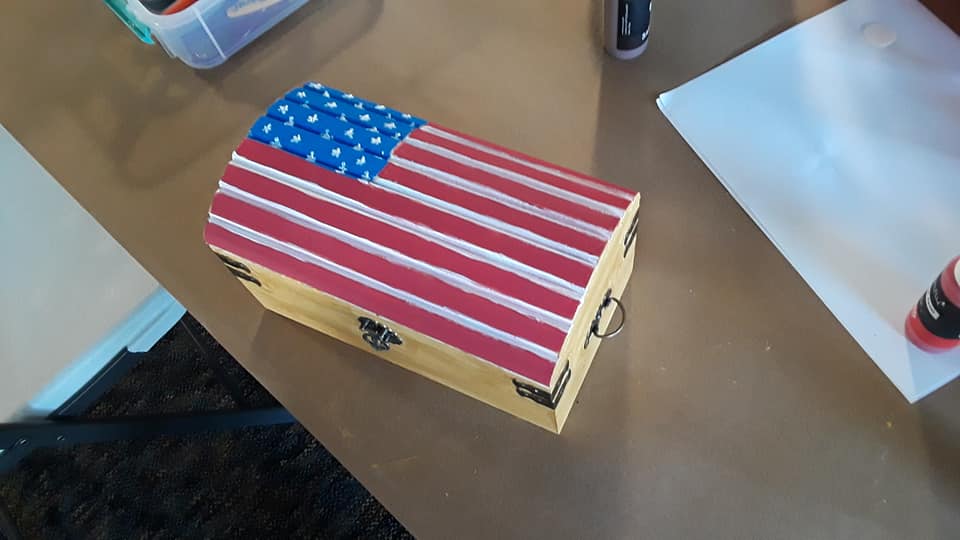 I recently attended an A.R.T. (Advanced Resolution Therapy) session and part of the session was arts and crafts. I spotted an unfinished, wooden box that looked like a treasure chest. It featured a curved , notched lid, little handles on the end, and a latch on the front. I selected it as my project with no idea of the impact the finished box would have on me and everyone in attendance.

I painted the  box a metallic gold to go with the treasure-chest theme, and the longer I looked at  the notched lid the more it  looked like the stripes of the American flag, so I painted them red and white, but that didn’t look quite right, so I added the blue field and stars, and there was my American flag.

I stepped away to get snacks and as I returned to my work station the little box seemed to me to look more like a flag-draped coffin  than a treasure chest. I just stood and stared at the little box as my snacks went untouched.

Sitting down at the table, I laid my plate of snacks aside and picked up the box, turning it in my hands, getting some wet paint on my fingertips, and wondering what part of my mind caused me to create it.

As I was contemplating my creation, our session guide asked each of us what our project represented. When my turn came to speak, I amazed myself at my answer.

I told them that I had started out simply creating a chest to hold some of the treasures I had acquired since Bryan had been killed; challenge coins, pins, patches, etc. But, as I had neared completing the project, the treasure chest took on more of the appearance of a flag-draped coffin. In my mind I could clearly and painfully see Bryan’s coffin; the coffin that held my most precious treasure.

Buried treasure does no good for anyone. Matthew and Luke wrote, “For where your treasure is, there will your heart be also.”

I hope that if I ever became rich that I would willingly and readily share my wealth with those who suffer. There are many parents suffering the loss of their own treasure. Bryan and his legacy of love and patriotism are my precious gems, and I will continue to do my utmost  to share that treasure with all my heart.